Gina Airing is currently in her 2nd year as the Head Coach of the Patriot's JV Girls Basketball team. She is a native to Frederick County, MD. Coach Airing is a 2003 Linganore High School alumna, where she played soccer for 2 years and basketball for 4 years.

Coach Airing extended her education and basketball career by attending Hagerstown Community College from '03-'05. She was awarded the "Student Athlete" award by the athletics department at HCC. After transferring to Barton College in Wilson, NC, she graduated with a Bachelor of Liberal Studies in 2007 and a Bachelor of Science in Physical Education with a concentration in Strength & Conditioning in 2008. While attending Barton College, Coach Airing played Division II basketball. She has won the "Student Teacher of the Year" award amongst her peers at Barton. As well, she won another "Student Athlete" award amongst the girls basketball team at Barton College.

After her college days, Coach Airing was hired as an SEIA for FCPS. She was offered a job back at her alma-mater town, where she taught Health/Physical education at Toisnot Middle School. She also coached boys and girls soccer. Coach Airing taught and coached at TMS from '10-'14. In the Fall of 2013, Coach Airing lead the boys soccer team to an undefeated season and earned a banner in their school for winning the Tri-County Conference Championship.

In the Fall of 2014, Coach Airing took a position at Tuscarora High School in Frederick, MD, where she taught Health and Physical Education. As well, she coached the JV Girls Basketball team. Coach Airing then moved to GTJHS in the Fall of 2015, her current home and family. She is a Health and Physical Educator and is looking forward to another successful season of coaching the JV Girls Basketball! 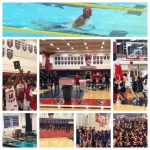